This website contains adult material and is only suitable for those 18 years or older. Click Enter only if you are at least 18 years of age.

San Francisco (CNN Business)It's common these days to hear about a food or beverage company investing in cannabis. It's more unusual for a cannabis company to, say, snap up a soda brand.

In recent months, an emerging cannabis firm has quickly acquired a significant position in Jones Soda (JSDA) with an eye on bringing the wild child of soft drinks into CBD beverages.
Late Thursday, Heavenly Rx, a hemp portfolio company of cannabis investment firm SOL Global Investments (SOLCF), invested $9 million to buy 15 million shares of Jones Soda, bringing its ownership stake in the Seattle soda company to 25%. The infusion is a welcome sum for Jones, which has been accumulating losses.
As part of the arrangement, Heavenly Rx received a warrant to acquire an additional 20% stake and was granted the right to acquire stock in the open market to bring its share up to 51%. Heavenly Rx's move follows an investment made earlier this year by SOL Global, which purchased a 10% stake in Jones.
Jones is using the money to develop beverages featuring cannabidiol, or CBD, the non-psychoactive cannabis compound that has become trendy for claimed health and wellness benefits such as reducing pain, lowering anxiety, and reducing inflammation.
The Heavenly Rx investment will also help fund the creation, marketing and distribution of Jones' existing core offerings of bottled beverages and fountain drinks, as well as building out the brand, said Heavenly Rx CEO Paul Norman, who joined the Toronto firm last month after a 30-year career at Kellogg (K)Company.
"It's a good product extension for the Jones brand to drive growth," Jones CEO Jennifer Cue told CNN Business.
The appetite to do things differently is ingrained in Jones, a company that once bottled a "Thanksgiving Dinner" soda and has churned out a rainbow of uniquely flavored beverages in bottles plastered with customer-shot photography.
But sales have slumped as consumers have shifted away from sugary soft drinks. Jones has responded by reducing sugar in its line of sodas, creating sugar-free beverages and launching a non-carbonated lemon and coconut drink called Lemoncocco. 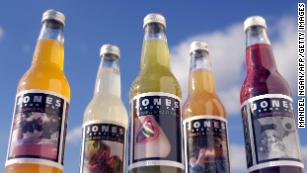 Jones needed an infusion of investment and innovation, Norman said.
It's a fabulous brand," Norman said in an interview. "It's rebellious. It's got a great history behind it."
At the same time, he said, Jones had gone a bit sideways.
The company's sales have been on a decline for the past three years, financial statements show. It closed out 2018 with $12.6 million in revenue, down from $13.3 million the year before. Its net loss widened to $2.1 million from $1.3 million.
2019 hasn't been much better. Sales were $2.8 million during the first three months of the year — flat from the first quarter of last year — and Jones reported a bigger loss in the same period.
Norman, citing his consumer products background at Kellogg, said he believes the opportunities for CBD drinks are immense. And although there have been a surge of hemp-derived CBD products since hemp gained protections under the 2018 US Farm Bill, the market remains fractured and filled with smaller, lesser-known brands, he said.
He believes Jones has the opportunity to be a big-name brand in the space.
"The category is going to grow to north of $20 billion," he said. "It's going to grow in a big part due to growth in mainstream distribution."
The amount of growth, however, could heavily depend on regulation. The US Food and Drug Administration, which oversees food products and additives, is reviewing whether hemp-derived CBD extracts can be included in food, drink and personal care products.
If the FDA gives a green light, Jones won't hesitate to jump in, CEO Cue said.
"If it all comes to fruition as everyone thinks it will, it could be a huge category," she said. "And we don't want to miss out on that."